When I saw the missed call and voicemail from my doctor’s office on my phone during my dinner break at work, I wasn’t worried. After all, I was set for an appointment there in two days to receive Botox for Migraine, a long and intrusive procedure requiring 31 injections and all sorts of hoops to jump through. It was very exciting for both me and the office, as it was set up right before Dr H’s departure and I would be their first (though not Dr. K’s, I made sure).

When I heard Kat’s voice projecting tinnily through my little iphone speaker, however, I became alarmed. Due to the severity of my illness and frequent phone calls, I’ve become something close to friends in my acquaintance with Kat, who is Dr. H’s sister, and Melissa, with whom I share many mutual friends. So I knew that Kat was upset when she haltingly began to explain that despite what Medical Mutual had told J when he called weeks before, they were more than likely going to reject the claim because Dr. K is not a Board Certified Neurologist or Pain Specialist. Kat’s voice broke as she ended the message, and I immediately called john, tears streaming down my face. They’d told him. THEY TOLD HIM THEY WOULD COVER IT. I was emotionally and physically prepared. I’d taken most of the day off work, as had john. And I was desperately counting on the possible, probable even, temporary relief (it worked briefly for me before, in its experimental stages, with fewer injections). When he answered I could barely choke out words, and at first, though clearly disappointed, he said “We weren’t sure it would work anyway,” and “You can get it with Dr T, set it up in August.” Those were not the fighting-tooth-and-nail responses I was hoping for, so I said okay through my sobs and hung up. And sat on the hard floor in the staff room at work and cried.

When john called back in about 10 minutes, he said to my relief that he HAD called Medical Mutual to demand answers. He told me the person he’d talked to had been very nice, and had said that nothing had been denied, and in fact she was still sure it would be covered, as Dr. K was on their “approved list.” The person said “We will approve it, the doctor’s office just today sent in some different procedure codes, so those have to be reviewed.” I was relieved; I wanted to believe. It was going to be okay after all. We also discussed that while expensive, the procedure didn’t seem likely to cost more than $1300, and we’d just gotten our tax return. My parents paid when I’d gotten it done before, and I thought I remembered something like $700 per treatment. We’ll get it done, john and I promised. I was keeping my appointment Friday, and one way or another, we’d get it done. I talked about it on Facebook, researched it some more, and went to bed feeling relatively optimistic.

The next morning, however, everything was shot to hell by 11am. I tried to wait for the office to call me, as they said they would, but Medco Health got to me first, the prescription side of my insurance. I was told that my prior authorization to receive more Imitrex than my plan allows (9 tablets per month) had been denied. My doctor’s office had failed to provide evidence that I get more than 4 headaches per month!! Ha ha ha ha ha…..

That, I at least knew, would be easily remedied as it happens almost every time my prior auth has to be renewed. “I get more than 4 headaches per WEEK,” I told the lady, who blandly told me to submit my appeal in writing to blah blah blah. I hung up (wouldn’t it be great if we could still “slam down” our phones?) and called the doctor’s office. Imitrex, no problem, Kat said, so sorry, we’ll remedy that, but the Botox was still a huge source of confusion. I was put through to Lilly, the nurse, who said that because they were told it would most likely be denied, they hadn’t yet ordered the drug so it wouldn’t be there by Friday, and it was going to cost THEIR office $1000 and she had no idea what our final cost would be but it would be more than we could pay. My throat started closing up. While we were talking, going through the whole “but they told my husband,” “well they told us,” Medical Mutual called to talk to Lilly and I was put on hold. Denied, she said when she returned, no way around it. I started to cry. Lilly was very kind. I hung up and collapsed onto the couch with a very concerned Zo, clutching my quiet but still glowing phone, my last instrument of hope all morning. I tried not to shriek or sob hysterically in front of my daughter, swallowing helpless anger and frustration and grief and feeling the inevitable headache tide somewhere in the briny inner dark. I turned my wet face to my daughter and wordlessly touched my nose to hers. She dabbed at a tear with her fingertip. “I got you, Mommy,” Zo said. And I was glad. 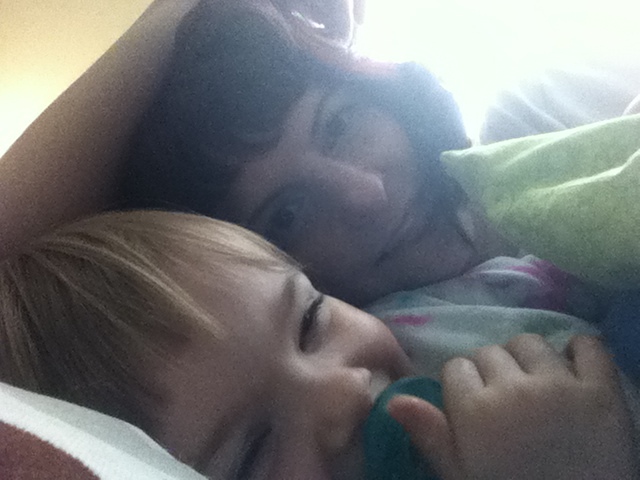