I have never been a big believer in natural remedies and therapies for my migraine disease. I’ve tried acupuncture, biofeedback (with and without electronic machines), talk therapy, hypnosis, physical therapy, massage, and chiropractic care; as well as magnesium, B2, feverfew, and ginger. I believe some of the therapies would work in conjunction with medicines to reduce stress and therefore the number of headache triggers; and the vitamins and herbs might help a little if I were patient enough; but it’s always so hard to get all the factors in control at the same time. I’d wind up in the hospital again after spending more of my (or my parents’) money and effort and belief and time and think, “Well, that obviously wasn’t working.”

Talk therapy is the longest treatment I’ve stuck with – most recently I tried “pain therapists,” social workers or psychologists who specialize in counseling patients with chronic pain. Those were pretty much dismal failures. The most successful therapy I ever had was in the late nineties with a nurse psychologist named Virginia, a mind/body tough love practitioner. She introduced me to the book “Women’s Bodies, Women’s Wisdom” and gave me homework.

The most horrible experience I had was with a near-elderly hypnotist who “practiced” in his home basement office and was recommended to me by the woman who taught my Tension Management course in college, which I subsequently failed for missing more than 3 classes. This guy claimed to have cured anyone who ever came to him with migraines. After a few sessions with me, he told me in my weakened post-hypnotized state that I didn’t want to shed my illness because I still wanted to be taken care of by my parents. Even in my early twenties I knew there might be some truth to what he was saying (I had almost lost my parents due to a car accident when I was 12 and had been traumatized which is something I worked on later with Virginia) but also knew that a) he had brought that to my attention in completely the wrong way and that b) nothing was ever that simple. I sobbed hysterically in that basement room, stared down upon by a huge poster-sized photo of the hypnotist/therapist/charlatan on a mountaintop with skis, ran out of there and never went back.

More failures – three completely different chiropractors, ten years apart, found three completely different things wrong with me and promised to make me feel better after lots and lots of sessions. I stayed with each of them for a while until it was clear I wasn’t improving and was perhaps getting worse. The acupuncture was extremely painful, oddly, not at the needles’ points of entry, but all over, like my muscles were being poisoned. The tension in my body while it was happening *gave* me headaches. Then the guy left a needle in my head, which I discovered because of a strange tingling sensation around my hairline on my drive home. I never went back there either.

As far as vitamins and herbs, I don’t know what it is about B2 that seems to make up something that migraineurs need desperately, but our recommended daily dose is 400 mg, which is 23520% of the RDA. I stopped taking it at one point and then when I wanted to start again, it was no longer carried in any local grocery / drug stores. Magnesium is tough – generally it is agreed that those with frequent migraine have low magnesium – but how to replace it in the body is tricky. Studies are inconclusive, and nowhere online can I find any agreement regarding how much to take, what type, when, and with what. Generally it is agreed that Citrate is absorbed best.

Since my hysterectomy, when I didn’t see quite the decrease in headaches I’d hoped for, I realized it was ridiculous that I was not taking these harmless, mostly side-effect free vitamins and minerals which are supposed to be so good for me. Dr. “Gotohell” who has become much less the devil to me now (after lecturing and yelling at me and john for hours one night in the ER and essentially refusing to treat me) and can be almost kind, now, post-hysterectomy, told me his fabled migraineur wife had recently begun taking a mixture of ginger and feverfew which was working for her. I thought, since it couldn’t hurt, it would be nice to tell him I was at least trying feverfew again too, next time. When I went to the store, I located feverfew but couldn’t even find magnesium citrate, it was all oxide. And I thought, the thing that has changed the most since the last time I was taking these things is how much is available to purchase online now.

So I typed “magnesium citrate” into Amazon, and lo, there it was. And cheap. And because I’d searched for that item, tons of other migraine products came up. My mind reeled. Vitamin B, Feverfew, Butterbur, Coenzyme Q10, ginger. Hyland’s natural migraine relief tabs, which have the controversial belladonna in them, so after their teething tablets problem you could no longer get them in stores. Some pepper (capsicum) nose spray called “Headache Buster.” Something called “Migrelief” which contained the right amounts of magnesium citrate, vitamin B2, and feverfew. I promptly added that to my cart.

4 months later I feel like I can tell a real difference, especially now that I’m off the Lamictal. I have since bought and started taking CoQ10 and Butterbur (both of which I’d read a lot of encouraging things about lately, and again, no side effects); the Hyland’s tablets; the pepper nose spray (provides a good kind of temporary relief, like an internal ice pack); a peppermint balm stick to apply directly to the head (not as effective because my forehead is so immune to all that kind of stuff now, but it smells good); and discovered on a separate website something called “Migraine Support Formula.”

I was SO skeptical, because of the separate website and all the glowing,”I’m CURED!!!” testimonials. The story of the husband who had made a lot of money, quit his lucrative business searched and searched the world and finally discovered the right ingredients and founded “The Migraine Support Group” and developed this formula. But I thoroughly read the whole website, and it was every vitamin, mineral, or herb I’d ever heard of being beneficial for migraine ALL IN ONE. Some ingredients, like 5-HTP, I’d heard of and tried years ago, but like all the other naturals, I hadn’t stuck with it long enough. The obvious magnesium, B2, and feverfew in the right amounts. But also B6 and B3, Butterbur, ginger, CoQ10, valerian, ginkgo, white willow bark. Amazing. I did a search of the company and failed to learn anything bad about it. All the scientific studies are linked, there’s a money back guarantee, and it’s certified. And it’s not that expensive. About the same as I am currently be spending on Migrelief, CoQ10 and Butterbur per month, which is just 5 of the 12 ingredients.

So, I am super excited. I have about a month and a half of Migrelief left and don’t want to waste it, but as soon as I’m down to about 2 weeks left I’m going to order the shit out of some all natural, 100% satisfaction guaranteed, Migraine Support Formula. The worst that can happen is that it won’t work, but I’ve had all of those ingredients before and know I can tolerate them. It will be interesting…

And… this is the first week in a month and a half that I haven’t had to use sick leave!  Appointment with Dr. “Manhands” tomorrow. 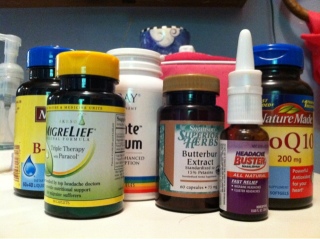 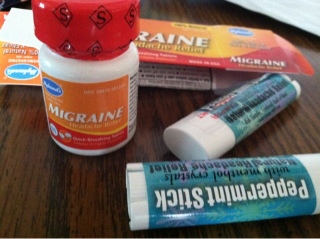