It’s been a long, painful three weeks since I last wrote for this blog. Having reached another very frustrating point, I re-read my last two entries late last night, and what I discovered was extremely eye-opening. I am SO glad that I documented the experience of feeling fantastic, and then the next day, NOT feeling fantastic. I had happened to mention that just a few days prior I’d started taking the Migraine Relief Formula, and that the headache had struck in the late evening, and then got worse in the middle of the night. I even mentioned feeling angry. Since then, I have been getting similar middle-of-the-night headaches almost every night, accompanied by feelings of agitation. All through our Cape May vacation, I struggled. I had to take tons of medication. Three times while we were there I felt so nauseous that I nearly vomited and had to go to bed. Which isn’t typical. Something was going on, but I was tired, I was frustrated, I didn’t have the time or inclination to figure it out.

Now, having been back home for several days and still experiencing those same symptoms (except for the nausea, thankfully) as well as being nearly out of meds, I’ve begun sorting through things in my brain, but just haven’t been sure. I am so used to headache ups and downs that I knew it might not be for any reason other than extremely hot weather and the stresses involved with any vacation. I also am well aware that all medications, whether herbal, over the counter, or prescription, have side effects which may go away after a few weeks. On the other hand, the same medications may take anywhere from 4 – 6 weeks to 4 to 6 MONTHS to work the way they’re supposed to, so you can never know unless the appropriate amount of time has elapsed whether you will have success or not. So I was just waiting things out.

Until reading those blogs. At that point, it became undeniable that this weird headache pattern started as soon as I switched to the Migraine Relief Formula. John and I could only identify one chemical in the formula which could possibly cause a problem; the 5-HTP, which is the same one we figured might be making me sleepy. I have taken it before and we couldn’t remember what had happened. Obviously I stopped taking it, but I had also stopped taking B2, which had always seemed to work okay with no side effects, so that fact wasn’t enough to alert us. Now Sir thinks we probably decided to stop the supplement years ago, whenever it was I tried it, because it is essentially THE serotonin molecule, and with my Cymbalta (or whatever SSRI I was taking before, I’ve always been on one) and Imitrex, that is just way too much serotonin to have floating around in my brain. I probably encountered serotonin syndrome.

Yesterday all of this began to dawn on me. I did a search of 5-HTP and found side effects listed as nausea and vomiting; mood swings; vivid dreams or nightmares [yeah I had those too]; and some other things I’ve been dealing with as well. The most interesting information was Interactions. All the sites said to definitely not take 5-HTP if you currently take any kind of anti-depressant. It could result in too much serotonin in the brain, which can cause the side effects above. Also listed, though not with the big red X but more of a “keep an eye on” kind of interaction warning, were any Triptan medications (Imitrex), Dextromethorphan (which is the “DM” in cough medicines), AND – this is the one I didn’t know about at all – Tramadol, the non-narcotic pain killer in Ultracet which I use a lot of. I haven’t taken any cough medicine in the last month, but I have taken a hell of a lot of Ultracet, and Imitrex, and of course my Cymbalta every day. I was like serotonin-ing myself to death. No wonder I was having mood swings, no wonder I was having headaches. Geez.

So, I stopped. “Migraine Relief Formula,” that herbal / vitamin concoction which I was so excited to find is actually totally useless, even harmful, to me. And how many others, because of antidepressant use? How many people with chronic headaches take SSRIs? 80%? I wish they just hadn’t put 5-HTP in there. Studies are mixed on it for headache anyway. But… oh well. At least I was able to figure out this latest problem.

I looked through my medicine cabinet and re-ordered separate Butterbur and CoQ10. I still have some “Migrelief” which contains Feverfew, B2, and Magnesium. So I’ll just stick with those. And hope that I will have another day soon when I am ultra-excited that I haven’t had to take any pain medicines, and maybe it will be for real.

Another thing which affects my headaches is social activity. I think that I haven’t been able to see friends nearly as much this year, even though at times my health has been better; there are other factors like those friends’ schedules, mainly. I start to lose touch with parts of myself, the parts which have nothing to do with illness or responsibility or work or family. Emotional stress is a big component in headaches and I think getting out of my house and seeing friends is a wonderful antidote for that. I have been MISSING my social time. All of my friends, whether I see or speak to them every day or only communicate with them on Facebook, have been so incredibly supportive of what I’m sure has seemed like a very long, continuously annoying ordeal. I am grateful. I am lucky. Thank you.

I want to end this blog by discussing my favorite and least favorite medicine: Dihydroergotamine. Ergot, you know, the wheat fungus that makes people crazy, that might have been partially responsible for the Salem Witch Trials? That stuff. Long ago it was somehow discovered to help migraine sufferers; and it really really does. The best way I can describe DHE is that it dissolves the headache at the root, rather than covering up the pain or cutting it off. Narcotics like Percocet or Vicodin or Dilaudid are gauzy, cloudy sheets that drift over the twisting scraping branches and rustling leaves of pain, quieting them, creating temporary peace and stillness. Triptans like Imitrex or Maxalt chop the pain off effectively, but leave a stump, the foundation of the pain. DHE disintegrates all in its path, with acid. It burns and doesn’t leave a trace. DHE isn’t friendly, never needed advertisements or drug rep samples or lovely tender poppy plant feelings to pretty it up. It has been around for 60 years, an old school intra-muscular injection my mom learned to administer when I was in high school and John mastered before we were married. I can do it myself if need be. It is what they use, IV, when I am hospitalized because finally, by what mechanism I’m not sure, DHE is the only thing that truly works. It is the least likely to cause rebound; it can break a headache cycle no matter what its source.

However: DHE hurts. The thick IM needle hurts, the medicine entering my muscle or vein hurts, it hurts every step of the way. It causes twitching, anxiety, and nausea. I HATE it. I have to arm myself with a host of other medicines just to beat back those side effects. Benadryl, Xanax, Zofran. Something for pain, if possible, because my headache will actually get worse before it gets better. An additional bonus is that it is dangerous to take DHE within 24 hours of a Triptan. That can make things tricky. I think we’ve gotten as close as 6 hours before, in desperation. And now that the ER is legally less able to treat me with what works in that setting, I rely on DHE at home more than ever. I have had 5 doses in the last week and a half. Hopefully I won’t need any more for a good long while.

As the last of this serotonin surplus washes away, I hope the improvement I was experiencing before returns, so that I won’t need to use *any* of my medications as often, and can spend more time with friends and family. And more time just as myself, to learn again how to experience life as most people do every day. 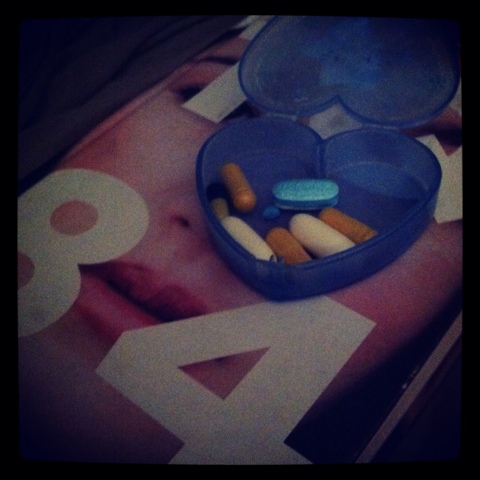