For those of us struggling every day with chronic invisible illness, one of the most discouraging feelings is realizing that someone may not believe the pain we’re suffering. It might be the careless observation of an acquaintance (“But you don’t look sick”); the frustrated words of a well-meaning friend (“You’ve tried so many medicines and NONE of them work?”); or someone on Facebook who links info about the newly-approved Cefaly neurostim machine on your timeline with the assumption you’ll now be cured. But when this minimization of pain feels the worst, at least for me, is when it is your own doctor who seems to not take you seriously.

I felt extremely lucky, recently, to get a timely appointment with my neurologist, due to a cancelation, which I wrote about in my previous post. I had been dumped by my PCP who had been prescribing my meds and was in a tight spot. I was realizing maybe I relied too much on pain medicine to get me through tough times, or even not so tough times, setting me up for bad rebound patterns. Dr. T agreed and did not prescribe any more pain medicine or benzodiazepines, saying I’d come a long way. Treat only twice per week, she said, with Imitrex. Yes, I suffer daily headaches, but by going to this Headache Workshop and that Pain Therapist / Biofeedback Practitioner I could maybe work my way down to two treated headaches per week. In spite of no longer being able to hold a job, and having recently been determined to be disabled by the government because of the intractable nature of my disease, I still wanted to believe.

On my way home that day, studying my print-out from the appointment, I saw with relief that Dr T had left the medications in question as “current” on my file. I assumed that meant if I was in a bind I could still use those meds occasionally, and with that flexibility I felt even more that this plan was something I could do. Relaxation, visualization, biofeedback, better rest, exercise, food, YES! I could DO it! And if not, a month of pain medicine here and there to off-set daily use of the Imitrex. I felt good about things. Hence the post “Good Things.”

Yet even at my most optimistic, I thought about how I’d never been able to treat headaches only twice per week in my whole life. Even with parent mandated healthy meals and bedtimes; exercise in gym class; a counselor father skilled in progressive muscle relaxation and biofeedback with whom I practiced the techniques daily, my migraines were always closer to chronic than episodic. I knew it would be a long, hard road, particularly because simply NOT TREATING, trying to relax, meditate, ice-and-heat my way through the pain had always backfired with vomit-filled hysterical trips to the ER. And in fact I did have to go to the ER the day after my appt with Dr T, and then again a few weeks later. One seven day period I managed to take only 2 1/2 imitrex, but after that, due to weather and stress and lack of sleep and who knows what else, I slipped back into a daily pattern of pain. I had to leave the Headache Workshop early on Friday and stopped at an Urgent Care on the way home, where they prescribed 8 Norco tablets. Less strong than Percocet, less acetaminophen than Vicodin, they worked pretty well. After a few more days I did go to the ER yet again, and afterward decided it was time to see if I could get a 30 day script for Norco maybe, to complement the Imitrex until I made it through this cycle, especially since it is not as strong as Percocet, Schedule III instead of II. I called and spoke to the nurse who runs the Headache Workshop, the one who had heard in class how anxious I’d been feeling about having only one abortive at home during our mandatory discussion of “uncomfortable feelings.” I thought it might help me that this nurse now *knows* me, and at first it did seem to help as she listened to my situation patiently.

However, when she called back late the next morning and left a message after talking to Dr. T, she sounded uncomfortable. She said that I had “done so well coming off them by myself” that narcotics would not be reintroduced. Something was mentioned about my decision to reduce my Cymbalta – maybe I should go back up on it, she said (I had stayed at 30 mg). Make sure you go to the biofeedback, she said (I AM), and maybe see if “the physician who prescribed the anti-anxiety medication” would let me try something different if it’s not working. Now, that seemed almost passive aggressive. Yes, I picked up my last Ativan refill, but it was prescribed by the doctor who dumped me, which I thought they knew, and while it is helpful for sleep it does not relieve pain and neither does Cymbalta. So what I ended up taking away from the long awkward phone message was that Dr. T thinks that my pain is anxiety-produced, psychosomatic (to use an older term), or more to the point, “all in my head.” That it could be better “fixed” by returning to a higher dose of a brain-tweaking anti-depressant which I told her I hated than with the milder narcotic pain reliever I had requested. I felt punished. That they thought because I’d used the last available Ativan refill I couldn’t be trusted. That because during Workshop with this nurse I had expressed anxiety about having only one abortive medication at home, my admission was being used against me in the actual treatment of my illness by the last doctor in whom I still had been able to place a modicum of trust.

So here I sit, tears streaming down the right side of my face, where the sharp burning radiates from forehead to temple, behind the ear to my neck. I have located enough Imitrex to take it daily; when I run out I will have to return to the ER, where the more you visit, the worse you’re treated. Two imitrex today, and yes, the dastardly Ativan to calm my angry, scared pounding heart, orally disintegrating Zofran for nausea, a camphor pain patch at the site of the invisible impalement of what feels like splintered wood dipped in acid protruding from my skull. My whole self, slumped in disappointment and defeat. A cooling “micropearl” band velcroed as tightly as possible above my eyes, holding my protesting scalp in place, adding to the indignity. Benadryl, Zanaflex, all my “helpers” but not the one addition which could break this cycle and make me more comfortable, prevent me from needing to take the Imitrex every day, some kind of precious elixir of the opium poppy or factory facsimile. But no, because I am no longer deserving. Because I am a flickering file on a laptop screen, shimmering numbers which no longer add up to a patient worth bothering with or a real individual in pain. Textbook treatment. While every single migraine medicine causes rebound, cheap, old-school narcotics get the bad rap. Big Pharma’s serotonin-messing triptans, antidepressants, anti seizures, even antipsychotics are what get pushed. It’s an assembly line. I am a faceless cog in the machine. Serotonin Syndrome, Stockholm Syndrome, they won’t stop until I’m brainwashed. Until I accept that this is all there is for me. “For you, there isn’t any more.”*

And yes I know that any headache specialist or neurologist these days advises against narcotics for migraine pain. I know it’s the “right thing,” what she’s doing, in a typical case of migraine disease. But I have never been textbook, and I was ready to try this better accepted way as long as there was a little flexibility. I have been on a narcotic or barbiturate analgesic of some kind as well as an ergotamine or triptan migraine medicine plus a preventative and separate anti-depressant and/or anti-anxiety med since I was a child. And now, at 40, I am cut off just like that and expected to “relax,” do a bit of biofeedback, go back to my higher dose of Cymbalta like a good girl?

I don’t think so. I deserve the individualized treatment my complicated history demands.

*thanks to The Troops for Truddi Chase and their amazing chronicle of DID When Rabbit Howls for the quotation. 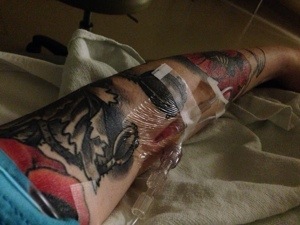 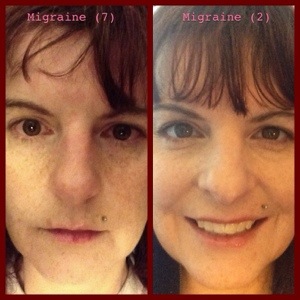