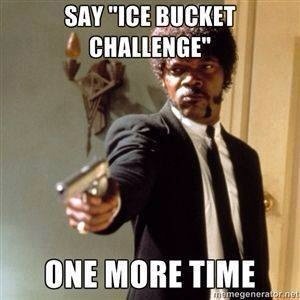 From the very start, I have had mixed feelings about the Ice Bucket Challenge. Undeniably the online phenomenon, which quickly went viral, has raised a huge amount of money for ALS, regardless of what percentage of the funds actually get used for research (which is a discrepancy some have pointed out). Another truth is, millions of people have now heard of ALS who never had before, or maybe had only vaguely heard of “Lou Gherig’s Disease,” though a lot of them probably wish the annoying videos would stop clogging up their news feeds. Which is how I feel about it, but also even more, vaguely, completely put off. And I feel like a horrible person for being so irritated.

Is it because of the inherent cliquishness of it, that because of the pay-it-forward part of the challenges, friends are named to either dump ice water over their own heads or donate $100 within 24 hours? Did I begin to feel left out because no one challenged me, “chose” me, a feeling similar to not being chosen for a team in gym class? Such an embarrassing thing to admit, but… probably. Another reason is maybe that I wish my own illness were getting so much press. Migraine has taken over my life, IS my life in some ways. I can’t work; I’m often in quite severe pain, with accompanying symptoms like nausea, vomiting, and photo/phonophobia, so I miss out on a lot of social activities and family time. There is stigma involved, which results in not being taken seriously by peers; being labeled as a “drug seeker” in emergency rooms; not being respected by doctors. So man, it would be awesome if there were a challenge to increase awareness of migraine and headache disorders, to raise money for more research into a very disabling disease which affects 36 million Americans. (I posted on Twitter a few weeks ago that I wanted to initiate a “Baseball Bat Challenge” for migraine awareness: hit yourself over the head or donate.) But certainly, I don’t begrudge ALS. It’s wonderful that more people are becoming aware of it, and it is far more disabling, in the end, than what I go through. So no, of course I’m very happy for ALS to be getting this shot at stardom. My annoyance could also be because people are engaging in this inane, uncomfortable stunt ostensibly to get out of donating money, even though most of the dumpers and dumpees have probably donated as well. But the whole idea started as a way to GET OUT OF donating money, to shiver and shake under a torrent of ice water instead. Because ANYTHING would be better than to send money to a charity, right? Or maybe, underneath that, anything would be better than having a chronic, possibly terminal illness. Look at us, we’re so fit and healthy that we can dump ice water over ourselves, WE don’t have ALS! Or any illness, for that matter – bring it on! We’re so strong, we can take it! But… I watched a good friend’s family participate in the challenge, when my friend’s husband is dealing with his own disabling chronic illness. So that’s not completely true either. The wasting of water? I am from the Toledo area, which had a water restriction recently due to the algae bloom in Lake Erie. So that too. All of the above, and none of the above.

And now, a headache specialist from West Virginia HAS come up with a challenge for migraine awareness: Hot Wings for Headaches. At first, yes, I rolled my eyes. Couldn’t they have come up with something better? It sounds kind of dumb, a silly copycat. Eat some hot wings, don’t drink water or eat anything else for 30 seconds, and then donate $25 to the American Migraine Foundation. If you can’t / don’t want to eat the wings, donate $50. But really, wings? When the chicken wing industry is notoriously cruel and wasteful? I’m not a vegetarian anymore, but those poor chickens. Or the fact that it requires you go out or order in, when some can’t afford to do that. But you know what… I started thinking, there are some serious PROS to this challenge. There are vegetarian alternatives to traditional hot wings, and the number of migraine families who participate probably won’t be significant enough to make any impact on chicken wing factory farms. [I am picturing an Onion headline: Migraine Awareness Stunt Causes Nationwide Chicken Wing Shortage; Super Bowl Sunday in Jeopardy] It also wouldn’t be necessary to go out, though restaurants offering wings are typically inexpensive. It might even give inspiration to families and friends who don’t go out often, motivation to go to a fun restaurant and have a good time for a good cause. Or, make some wings at home! Eating wings is pretty messy for sure, maybe a little uncomfortable for those who don’t enjoy spicy food, but it is nothing like ice water over the head.

So I’ve decided, YES, Hot Wings for Headaches. Eat some hot wings! Make a video, challenge others! Or, just donate money to the headache charity of your choice. Make an Ice Bucket Challenge video, AND eat some wings. At the same time, even! Or, just donate to both charities. Or since so much money has been raised for ALS already (and seriously, yay!) just donate to migraine research, which is tragically underfunded. Here are some good organizations: the American Migraine Foundation, which is the migraine charity chosen by the creator of Hot Wings for Headaches, Dr. Dave Watson; the Migraine Research Foundation; the UK’s Migraine Trust; and the American Headache and Migraine Association.


And lastly, just because you probably haven’t seen enough of them, right? Here are a couple of my favorite Ice Bucket Challenges:

David Lynch and his espresso trumpet; Sarah Palin (not a fan, but hilarious); and this crazy GIF.

As always, thank you for reading. Have a wonderful Labor Day Weekend lovelies!

yours in spoonie solidarity ~elizabeth