So, some people, and I don’t blame them, think I may be jumping the gun about feeling so sure there actually is something on my artery. I imagine there are way more people than the two or three who have said it to me. They have said it in the nicest way possible, but like, you know: Don’t get too upset yet. Stay in the now with your medical situation. You never know what the second test will show… maybe it will be nothing.

So, I kind of imagine a lot of people think I’m being kind of dumb and naive. Even ridiculous. And I’m starting to feel self-conscious about it. 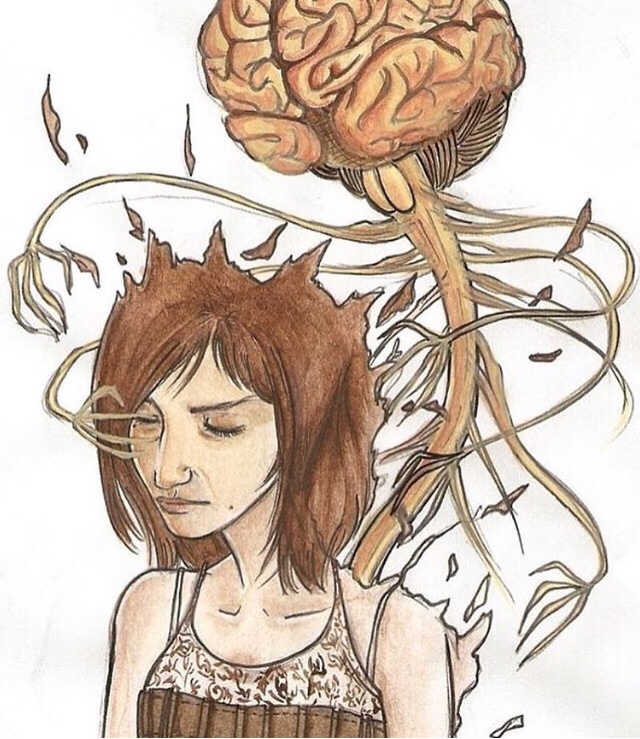 So, I want to tell a little more of the “headstory” (instead of backstory, get it), regarding the aneurysm and the migraines I had in late summer, and then maybe my belief in the results of the first test will make more sense. In late July I had a different kind of severe migraine. It hit suddenly, hurt severely on the right side above / behind my eye and also in my cheek, which was a brand new experience. The inside of my mouth hurt and felt weird. Then my fingers tingled and my arm started to feel numb. Then my leg.

I had been released from the hospital, my first inpatient stay in five years, only a week earlier. I was having severe neck pain that I’d just received Flexeril and Prednisone for, and I assumed that it was from trying to sleep with my arm stiff and straight out so my IV wouldn’t bend and beep and re-ignite the worst migraine I’d had in years. It had taken me 24 hours to stop vomiting. Even though I was now having that “different” migraine that they warn you about, I still didn’t have insurance, and John was grouchy and didn’t feel like taking me to the ER, and honestly I didn’t feel like going either. I knew what this was. I’m a migraine expert, a patient advocate on migraine.com, and it was clearly a hemiplegic migraine with trigeminal nerve involvement. John googled “Flexeril side effects” and thought it had something to do with that. So we didn’t go.

But the next morning, though the pain was very much better, the numbness and tingling was still there. Except it had moved to the left side from the right. I sat up and felt weird. I stood up and fell down.

I’m not kidding, I really and truly could not walk. Now, I have heard of people who were that affected by hemiplegic migraine, so I still wasn’t that worried. A little freaked out, but I certainly wasn’t thinking stroke or aneurysm, or, you know, anything that would actually kill me.

I stayed in bed all day.

Any time I had to go downstairs (where the bathroom is) I had to scoot down the stairs. Over the next couple of days I tried to walk and things got better slowly. I noticed that my right eyelid had drooped noticeably, and it stayed that way. About a week after the migraine, I bought a cane at Kroger. I chose a purple one with a blingy handle and decorated it with stickers. I had to use it, for a while, most obviously at auditions for our next theatre production. I was one of the Board reps there. I was really awkward with the cane and felt dumb. My friend was outside in the parking lot with her two daughters on some sort of electric scooter thing and I just felt so… old. And stupid and infirm and I didn’t even really know how to explain to people what was going on.

After two or three weeks I could walk fairly normally again, but my left leg was still weak and my arm and leg both tingled and began hurting like a cold sunburn. And then on my birthday it all happened again. Same sudden headache with cheekbone involvement, and the numbness and tingling moved back to the right side and were way worse. That time, I went to the ER. And I had a CT scan.

It was clean. So I’d been right, hemiplegic migraine or… just migraine weirdness. The nurse said they couldn’t do an MRI in the ER, but thought I might need to get one at some point. They were really nice and treated my pain and I went home, relieved that I hadn’t been having mini strokes. The numbness and tingling went back to the left and stayed there. And stayed there. My neurologist, Dr. Mahmood, dismissed the new symptom with a wave of his hand and said “Migraine.” He told me though that I couldn’t take Imitrex anymore because of the stroke risk, and told me to take baby aspirin every day (bad for aneurysms, FYI, all NSAIDs but especially aspirin). I reminded him I can’t take NSAIDs anymore. He sighed and said “You are so complicated. See you in six months.” I kept taking Imitrex because I had a lot of refills, and I mean, NOT TAKE IMITREX? Impossible.

I fell a couple more times, once from low blood pressure. My blood pressure seemed to vacillate between very high and very low. I hit my face on the corner of my doorjamb once. And in early December I sprained my ankle because I’d been sitting on my left foot without thinking at Zo’s Nutcrakcer tech rehearsal and when I stood up and put weight on it (I guess I’m “left footed”) it was like there was nothing there, and I fell, hard. I noticed that my right elbow and knee hurt first, where I’d fallen on them. Next I noticed that no one had seen me fall and was relieved. Zo and I left and when I was getting ready for bed and pulled off my sock, my left ankle was enormously swollen. I hadn’t even felt it.

Fortunately, in telling all this to Anita, my friend and study coordinator at MHNI, she was concerned and told Dr. Saper and the other neurologists there about the numbness and tingling. They thought that was too unusual for hemiplegic migraine to leave unexamined and told her to tell me to get an MRI.

And even though Dr. M didn’t really think I needed it, he agreed to order it. And here we are.

When I read some of this, finally doing some online investigating in the middle of the night (now THAT was dumb), I panicked and went to the ER shaking and crying. The nurses were wonderful. They told me that while it was very scary to have that MRI result, only the worsening of those symptoms should scare me at this point. Because I have had all those things since August, I was not / am not in an imminent danger.

But this is why I believe that the first MRI was correct, that I do have an aneurysm on my basilar artery and that the experiences I had in July and August relate to it. I also believe that it will be treatable, and I will be fine, and maybe even a little better than before. Though as Zo gravely informed me after I told my daughters about all this and tried to reassure them that it actually could be good news, but that I would always have headaches: “That’s right, because there is no cure for migraine.”